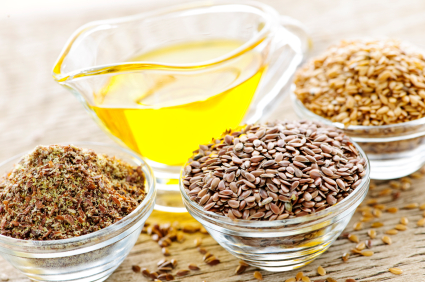 Flaxseed oil has recently been receiving attention for health benefits such as it's ability to lower cholesterol. Flaxseed oil is one of the best food sources of alpha-linolenic acid which is important for cell membranes, blood pressure regulation, and other functions in the body. Ourr bodies cannot manufacture alpha-linolenic acid, we must consume it in foods. Alpha-linolenic acid is an omega-3 fatty acid and is similar to the fatty acids found in fish. The alpha-linolenic acids found in fish oil are easily converted in the body to anti-clotting, anti-inflammatory eicosanoids, whereas the process of converting the fatty acids in flaxseed oil is slow and inefficient, especially if the diet is high in omega-6 linoleic acid (found in polyunsaturated oils and margarines). Alpha-linolenic acid is also found in canola oil, soybean oil and walnuts. Due to the fact that flaxseed and these other oils are unsaturated, it is not surprising that including them in the diet will lower blood cholesterol. One should be careful as flaxseed is prone to oxidation, and therefore goes rancid very easily. However, rancidity of flaxseed can be hard to detect through changes to taste. Consumption of oxidised fats and oils (such as those often used by fast food outlets) has been linked to increased levels of oxidised low-density lipoprotein (LDL). Apart from being rich in alpha-linolenic acid, flaxseed is rich in certain phytochemicals, such as lignin. Lignin provides fibre in the diet and is also a type of phytoestrogen. Phytoestrogens are thought to have an anti-cancer effect on the body. Lignins may also have a role in lowering cholesterol and maintaining bone density. Flaxseed oil generally does not contain lignins (they are found in the seeds) but some oil manufacturers add some lignins back into the oil. No one food can be hailed as the miracle food. All plant foods have something to offer in the way of disease prevention and maintenance of good health. Adding flaxseed oil to a poor diet is unlikely to provide any major health benefits, but adding it to a varied diet rich in plant foods and low in animal fats can be useful. Flaxseed flour or ground or whole flaxseeds can be found in muffins, breads, cereals, and breakfast bars and can easily be found in health food stores. Flaxseed can also be consumed as oil. If you want to include flaxseed in your diet, consume the oil or flour, not the supplements.