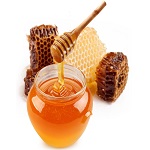 Since long, honey occupied a very important place in the culinary delicacy. However, apart from its good taste it has extreme health benefits which helped it gain its place in medicinal remedy. Starting from the Sumerians and Egyptians till the modern day Ayurveda, honey plays a vital role. It is good for blood flow. It is safer than sugar so those prone to diabetes can adopt honey instead of sugar. But it should be consumed in little quantity to maintain blood sugar level. It is considered energy booster after yoga or exercise. It helps to boost up the energy by releasing fatigue. It helps to digest food faster and normalizes the bowel movement which prevents pimples and acne hence giving you a clear skin. It also improves sleep disorder in young children. Honey acts as antiseptic and cures bacterial infections. Its anti-oxidant property helps to release toxin from the body. It even plays an important role in fighting cancer. Researches confirmed that honey creates hindrance in progression of tumor. Honey’s antimicrobial properties can treat sore throat and cough and give you instant relief.